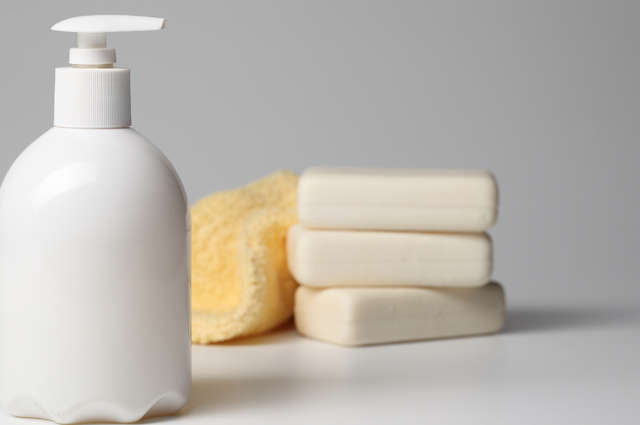 For a long time, when it came to personal cleanliness, there was only one frontline fighter: bar soap. Of course, bar soap came in many guises — square bars and rounded bars, scented and unscented, clear and opaque — but its essential look and function went unchanged for hundreds of years. Then other cleansers — both soap and non-soap formulas — began to appear. Bar cleansers were joined by liquid products, which were first used primarily for hand washing. The market eventually became flooded with shower gels, also known as body washes, which quickly became a popular alternative to bar soap.

If you’ve spent any time in the skin care aisle at your local store, you know that figuring out which products to buy, soap and non-soap cleansers included, can be a very time-consuming task. So which is better — bar soap or liquid soap? You might be relieved to know that at a very basic level there is no real difference between the two.

Like so many health and beauty products, there are advantages and disadvantages to both bar soap and liquid soap. One of the main complaints about bar soap is that it washes away more than just dirt. Harsh bar soaps can deplete your skin of the moisture it needs to stay healthy. Liquid soaps, on the other hand, often contain moisturizers, but they’re also more likely to have fragrances and other additives that can make sensitive skin crawl.

If you’re thrifty, you may find that bar soap is friendlier to your pocketbook than liquid soap.  However, if you’re not too fond of the slimy mess bar soap can leave in your soap dish, you might think liquid soap is worth the extra cost.

Bar soap has been around longer than liquid, but it often gets the short end of the stick when compared with its supposedly more glamorous cousin.

One claim against bar soaps is the bacteria factor.

Because people sometimes share the same bar of soap, fears concerning the transfer of bacteria have emerged. However, studies have shown that although bacteria levels on previously-used bar soaps are slightly higher than on unused soaps, there have been no detectable levels of bacteria left on the skin’s surface after using the soap. Bar soap users who are still worried about spreading germs can always make sure that each person has his or her own soap.

Another con of bar soaps is the fact that many have a higher pH level than liquid soaps. Because of this, some bar soaps can be more drying to the skin. Dried-out skin is not only uncomfortable but also heals more slowly when injured.

So, are you convinced to return to bar soap? Not so fast?